Pandemic: A cure for boredom? 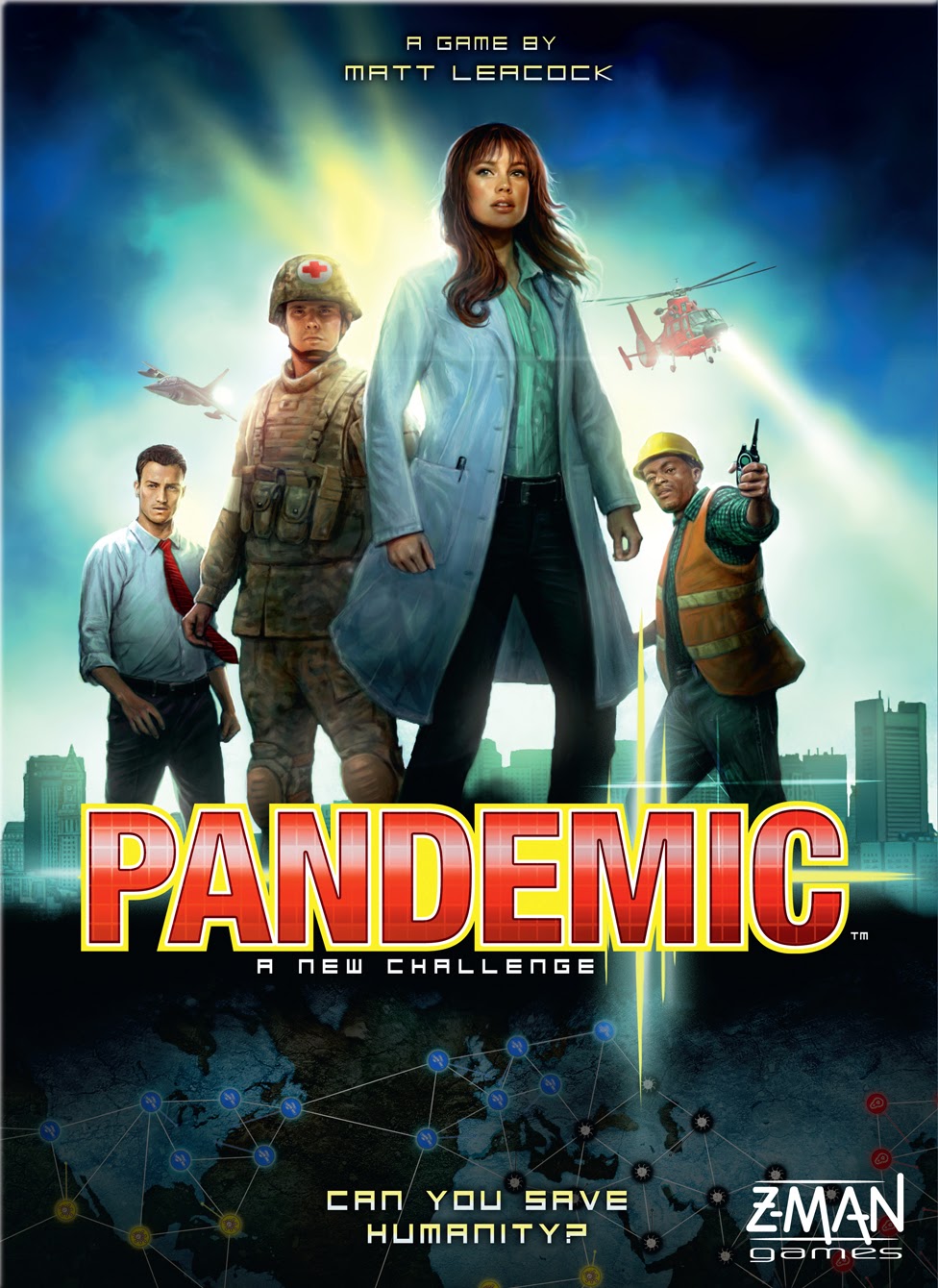 Mike: So our first review and why Pandemic?

Well I left that to my son to choose and this game was the one that captured his interest in board games. For us this is the one that started our growing collection of games and we feel it’s a great gateway game to get others interested in the hobby. If you’re totally new to gaming this is a great first purchase.

Pandemic is a cooperative game for 2-4 players. You play as a disease fighting team combating the spread of four deadly diseases threatening the world.

At the start of the game players are randomly given one of seven roles (however we have an older version where there are five roles). Each of these roles have a special ability and you will find certain combinations work better together than others. For example we found the medic very useful towards the end of the game as when (if!) cures are discovered he can remove disease cubes for free. Couple him up with the dispatcher that can move other players on his turn and you have the makings of an elite infection crushing team.

Once roles have been dealt everyone gets some player cards that are used to develop cures and get around the board. Infection cards are drawn out and cities on the board are infected with disease cubes.
It’s at this point that the players should be able to see the hot spots on the board and start to formulate a plan.

A city cannot have more than 3 cubes of the same colour at any time. If you have to place one more cube of the same colour it outbreaks and spreads to each connected city. This in turn can cause chain outbreaks that can create further hot spots. This lands you right in trouble and before long you can be in it up to your necks with infectious diseases everywhere.

So you jet around the board, draw some cards, send in the clean-up crew to heavily infected cities and you think so far so good we are doing ok aren’t we?

Here lies the trap of Pandemic and what makes it such a great game.

Mixed into that player deck are a number of these nasty cards.

The number of these cards in the deck are set by you at the start of the game. Four for the introductory game, five for normal and all six for heroic. These epidemic cards cause another city to be given three cubes and all those cities that have been drawn out on the infection deck are shuffled and put back on top of the infection draw pile.

Yes all those cities with three cubes could outbreak again right now and all those cities you thought “lets deal with them later they are ok for now” are all possible contenders to topple over with chaos.

After a few plays you will find a few tactics that will help you survive that bit longer. You will agonise over the decision to work towards the cure or try and prevent spread of disease. This really is the puzzle of the game and one that will leave you wanting more when you fail.

Where Pandemic excels is with its accessibility. Don’t let the suggested age put you off I think it’s too high. This can be easily played with children, my son was eight when we played this together.

One of the biggest challenges of Pandemic though is trying not to control the game when playing with new players. It can be all too easy for an experienced player to captain the game. This is a common problem for cooperative games though it’s not just isolated to Pandemic.

David:
I agree with my Dad about not trying to rule over the game because this can take the fun out of it. I like to make a choice on what to do on my turn even if it is wrong as I can learn the game this way.

What I like about Pandemic most is that there are a lot of ways to lose but there is only one way to win. The roles in the game are interesting as it can make each game different.

Some of the best games we have played together have been when we have lost. After the game we can talk about what we did wrong and how we can try and do better next time.

I really would recommend this game to people my age as it was easy to learn but hard to beat. If you have played Forbidden Island or Forbidden Desert and like it then I think you will enjoy this. 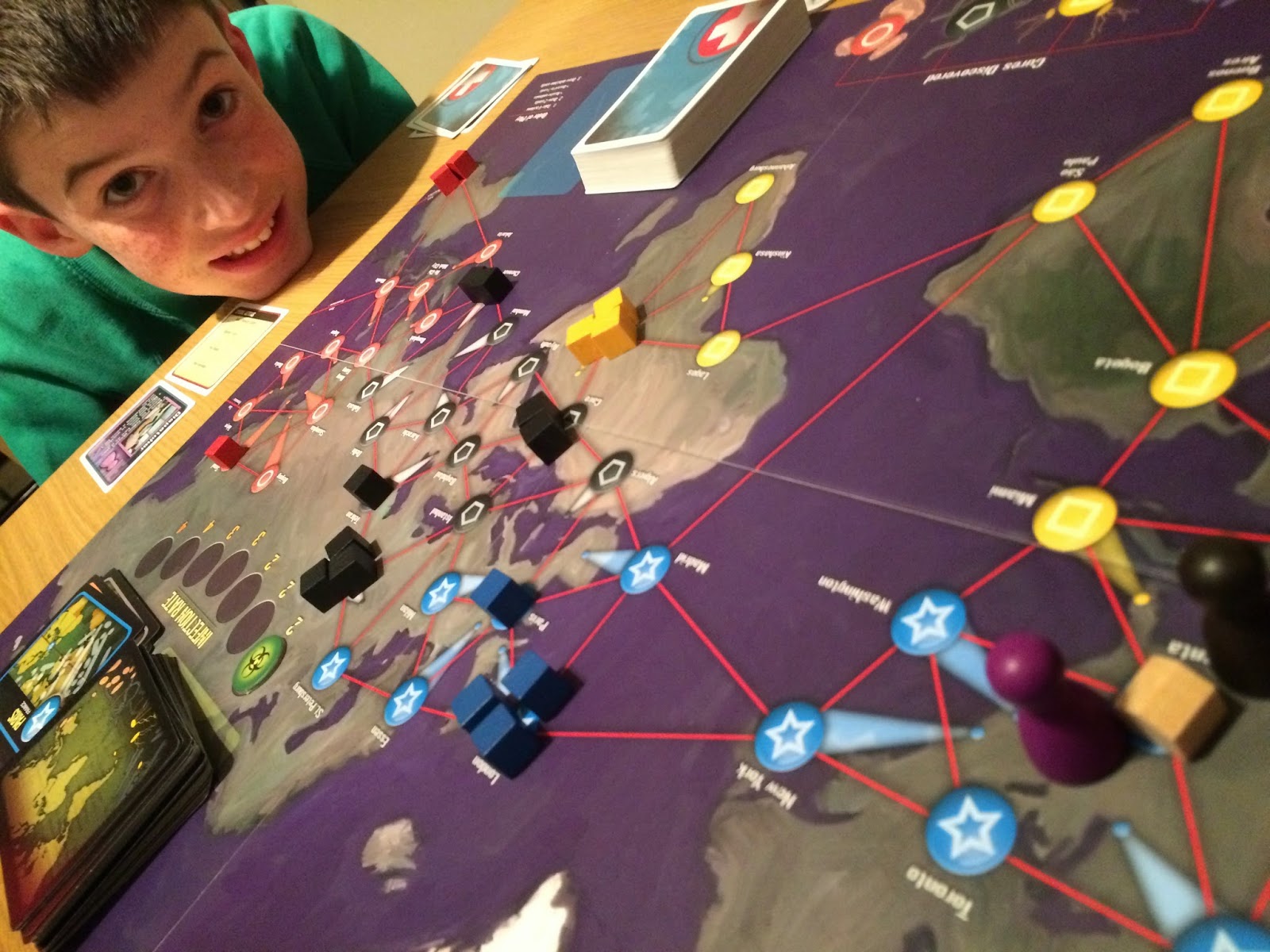 Mike: Also I haven’t mentioned there are a few expansion packs for this game. We haven’t played these and I won’t be getting them either as they aren’t compatible with older versions of the game. This is something I think the developers missed a trick with here as I would have purchased both based on how much fun we have had with the core game.

In conclusion we have had a blast with this game it keeps drawing us back for more. I can see it remaining on our shelf for years to come. A big thumbs up from Board Know More