Friday Filler: The Hare and the Tortoise 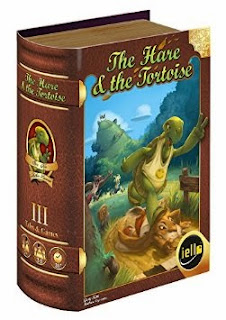 Mike: So everyone knows how the story of The Hare and the Tortoise goes right?
Well this is the Rocky II rematch.
The Hare is a little bit miffed that he got beat and demands a rematch. The Tortoise accepts and its game on. Oh and a wolf, sheep and fox turn up for a fun run as well.

This is the third game in the Tales & Games Series by iello games. I absolutely love the game box it looks like a story book.

David: I remember this in one of my story books when I was younger. I like it when board games are made from good stories. My favourite character is the Hare as I’m fast at running but I don’t stop in the middle of the race like him. The box is great I want the other games now so it looks good as a set. 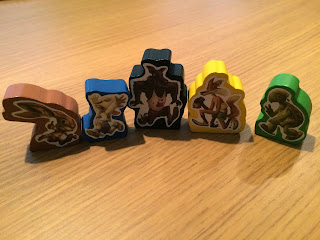 Mike: The game is part betting part card game and the suggested age is 7+. It does require a little bit of hand management and the moving mechanic is a little tricky to explain as well, just look at this card.

In basic this is telling you there are 18 Hare cards 17 Tortoise 16 Wolf… and so on.

The movement is as follows.

The Hare will always move 2 spaces no matter how many cards are played and won’t move any spaces if 4 have been played and he is first.

The Wolf will move 1 space if 1-2 cards are played and 2 or 3 spaces if 3 or 4 cards are played. There are some howling cards as well and if one of them are played none of the other characters move as they are scared by his howl.

The fox moves 1 space for each card played.

Lastly the Sheep moves 1 space for each card played and one additional space. This sounds good but if he enters a space with a stream he must stop to take a drink.

David: I didn’t find this confusing although in our first game we did forget to move the tortoise each round and was wondering why he was always at the back.

Mike: Ha yes we just thought it was because he was slow. So as you can see some younger players might need a little help. But get a few turns going and all should become clear. In fairness there is a lighter version of the game mentioned at the back of the rules. Oh and let the younger players set up the race track as it makes for a bit of fun setting up the game. This does make each race a little bit different. 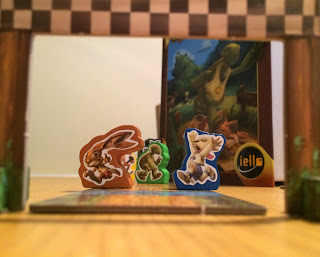 David: Yes making the track is fun as you can twist and turn it around the table. The game can change quickly as well as like Camel up someone in last place can end up first in a few turns. You need to think about the betting as well as you get given your first bet randomly but you can pick your second bet. If you like you could pick the same character and try and double your points at the end.

Mike: Yes we have seen this last to first place happen a few times. Also a good point about the betting you can go all in or spread your bets a bit. There is some room for light tactics as well. You can play cards for a character you don’t want to move when someone has played a howling wolf for example. You also may need to play cards you don’t want to in order to recycle your hand. 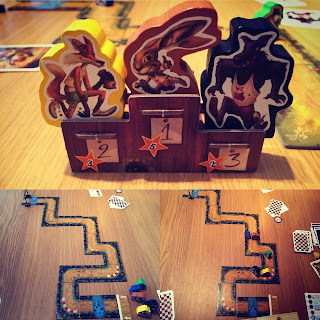 This is a very light hearted game that will be loved by young and old. Beautifully presented and with a great theme.

A big thumbs up from Board Know More.

P.S We first heard about this game on Tabletop check it out below.