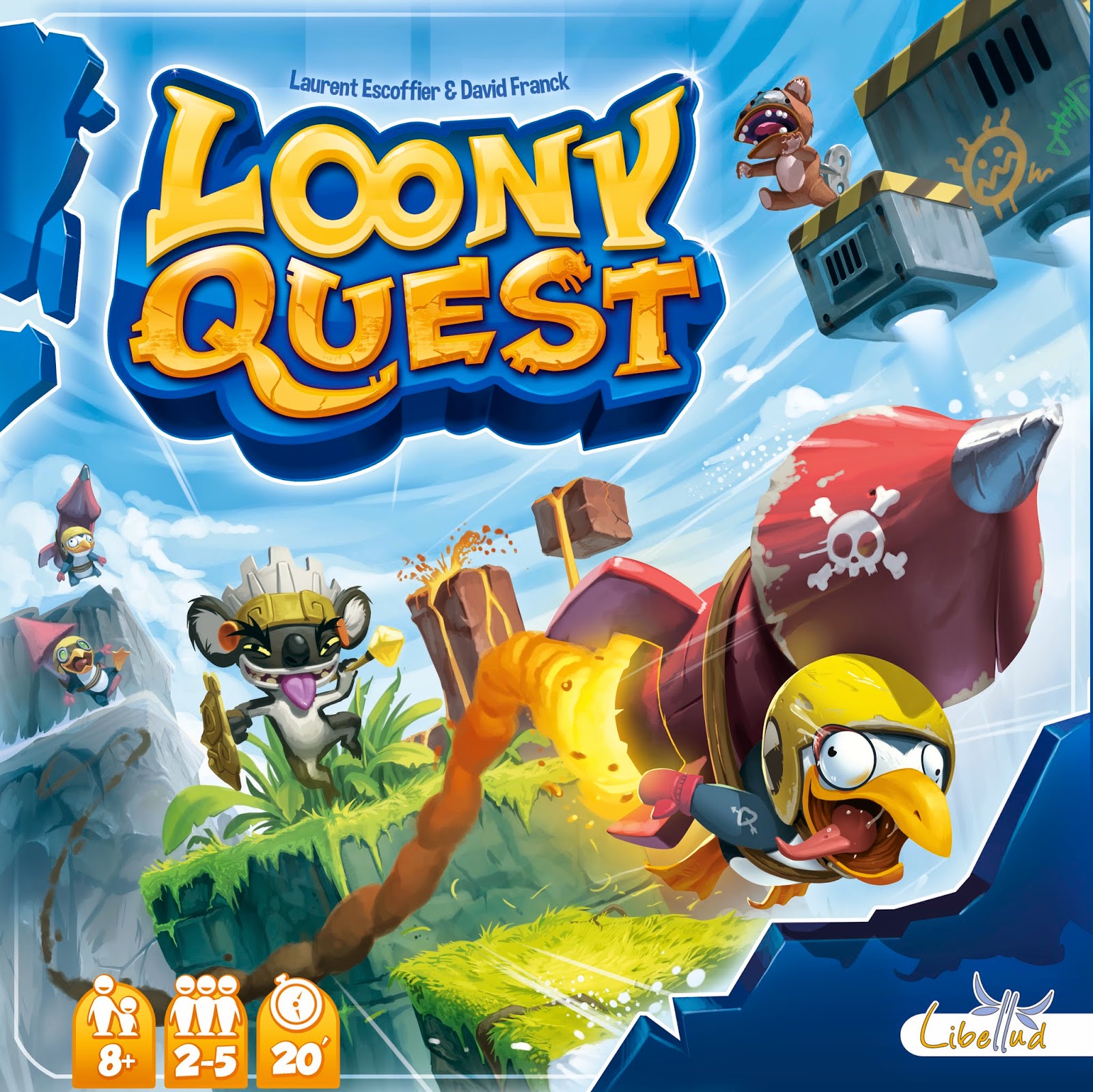 Mike:  Hi all the Friday filler for this week is the quirky Looney Quest. If you're like me the thought of adding a drawing game to your collection sounds about as much fun as a game night session of monopoly with accountants.  It might be because I possess the skill of a giraffe when it comes to drawing. It might also be the frustration of playing Pictionary and no one having a clue what I'm trying to convey with my spiderlike stick men.  But worry not Looney Quest isn't so much of a drawing game you just need to be able to draw some wavy lines, circles and dots. Hey I can manage that.

That’s not really fair it does require a bit more skill than that.

Players are given an acetate sheet each and a marker pen. On your turn you will look at the selected challenge and attempt to draw on your sheet the solution to the puzzle.
This could be joining up one end of the board to the other avoiding penguins with rockets strapped to their back or placing dots to shoot crates of dynamite. Whilst this may seem easy you only get 30 seconds to do this.
The look of concentration people have when playing this is brilliant wait for the tongue sticking out and scrunching faces.

David: It really is easy to pick up and play. I tried reading the rules and could understand how to play the game. The first world was easy but we are now on world three and it’s getting harder. I like the dot challenges as it is funny when people miss their target and hit penalty spaces.

Mike: Yes I have noticed the room for error is less the further you get into the game. Try and make a house rule here before you start as to how much error you will allow. We try not to be too harsh but sometimes if you have touched a bomb you have to take a penalty.

Where we have had the most laughs with Looney Quest is watching someone concentrate for that 30 seconds only to realise they completely missed the goal.
The penalty system in the game works very well giving player’s obstacles in their next round. These could be you need to switch hands or have one eye closed. If a player is doing really badly they stack so you could have a really difficult round trying to keep a straight arm whilst drawing with one eye closed.

David: The penalties are great fun, it makes the game more difficult and some of the power ups allow you to give a penalty to another player. This is a great idea as I can give them to the best player and try and catch them up in the next round if I’m behind. One power up is called the mosquito. You give this to another player and on their next turn they have to balance that small disc on top of their pen whilst drawing.

Mike: The game is beautifully presented. The cards that make up the different worlds you will be playing with look like they have been lifted straight from a Nintendo console game.
Don’t be fooled by its cartoon front cover this is just as much a game for adults as children.
At such an affordable price this game is a must buy in my opinion. One for if you are looking for a quick game to start a game night and break the ice.

David: Yes it looks like a computer game and there are so many cool things hidden in the background. I like trying to find the pixies. If you find them you can play the special stages in the game.

Mike: Is there replay value to be had here? Most definitely. In fact you will want to replay most levels straight after playing them. More often than not in sheer frustration that you clipped a few walls and lost all your points.

Verdict: Crazy game, silly laughs, you’d be mad not to get it.