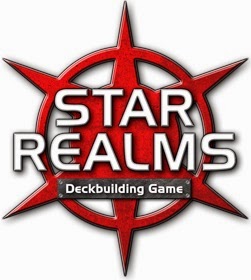 Mike: After taking a look at some of my favourite and most played games over the last few years I noticed a running theme – deck building.

I’m not sure why this is as I can’t pin it on one aspect. Maybe it’s because they are usually easy to pick up and play. They can be great gateway games for new gamers. It could also be the unpredictability of the game as you don’t know what cards will turn up or what strategy your opponent will adopt. One thing I do know though is I love a good deck builder.

Ask any gamer what their favourite deck builder will be and you will most probably hear Dominion, Legendary or Ascension. These are all great games in their own right and Star Realms deserves to be up there with them. Star Realms is similar in style to Ascension and in my opinion I think it’s a better game than Ascension.

It’s not that Ascension is a bad game far from it, but I know I can get more people to play this in my group. I prefer the sci-fi theme and I don’t know of any other space ship deck builders. The artwork in Star Realms is gorgeous. Every ship has some sense of action so these aren’t just flat pictures of ships on a black background.

David: Yeah I agree with you Dad about the sci-fi theme and I think that’s what enticed me into the game. Every card that came out I did not want to look at the abilities I just stared at the artwork and wished that I could draw like that.

Mike: So how does it play? Common to deck builders you will start with a weak hand made up of 8 scouts and 2 vipers.

The scouts are your starting currency of 1 trade point and Vipers give you 1 combat point. On your turn you will draw 5 cards from you deck. You will then play these cards and use your trade to buy ships, bases and outposts from the trade row.

Authority are your life points you will start with 50. First to get the other player down to 0 wins. There are some cards that allow you to gain authority points back.

You can also protect yourself with outposts. These are a good way to shield yourself. For example if you have an outpost with a defence of 6 and your opponent has 10 combat points they must spend 6 to destroy your outpost. They can then attack you with the remaining 4 points.

David: The way the outposts work are brilliant for me because if I put more than one down if gives me some time to think about my next few turns. One thing I don’t like about the outposts is that when you destroy one it goes into the discard pile when I think they should go into the scrap deck. 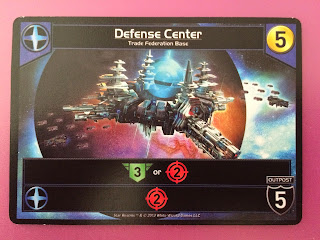 Mike: Darn outposts, you do like to play a lot of them and they can be quite frustrating. The key to this game is to try and make a deck with cards of the same faction. This will allow you to use the ally abilities. I’ll explain. 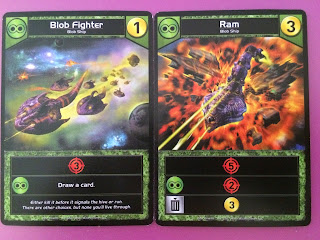 See the symbols on this card at the bottom. Well the trash one will activate if you trash the card and you may want to do that. It’s a neat way to clean your deck and gain a one off bonus.

That green symbol will activate if you have another card from the green Blob faction. So by playing 2 cards both will activate each other’s ally ability.
In the above example you will get an extra 2 combat points and draw a card by having these 2 cards in play together. If you can get a few rounds where you can stack up these ally abilities you can do some serious damage.

David: My favourite faction is the blob faction because they are more attacking based and there ally abilities are powerful. I can’t get enough of this game at the moment. With it being so quick to play I can get a game in before tea and before bed. I really like Dominion but this is quicker to set up and play and we can take it out with us easily.

Mike: If I have one gripe with Star Realms it the authority cards used to track your score. They are a bit cumbersome and get in the way. We just use a pen and paper to track the score. But this is such a small point. I can see why it was implemented to keep the box small and not have to add counters or a tracker.

This is getting a lot of plays from us at the moment as it ticks the boxes of a filler game but has enough depth to keep us wanting more.

We recommend this to any group as long as you don’t mind a sci-fi theme. With its small size as well it’s such a portable game and for its price you are getting a solid game with lots of replay value.

Due to the number of times we are playing it and the enjoyment we have had I will have to check out the expansion packs ASAP.
Posted by Unknown at 21:10