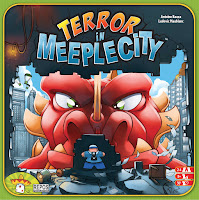 Mike: This game was originally released under the name Rampage but due to a licencing issue was later changed to Terror in Meeple City. Rampage was a popular arcade game in the 80’s. A simple game that lets you control one of three monsters with the simple premise of tearing a city apart.
I spent many hours playing this with my sister on the good old Sega Master System. So I was delighted to hear when a board game was released based on this old school classic.

Terror in Meeple City is a dexterity game for 2-4 players. You are playing a famished scaly skinned monster that is tearing through Meeple City looking for food. Yes you guessed it the food are the little meeple residents. 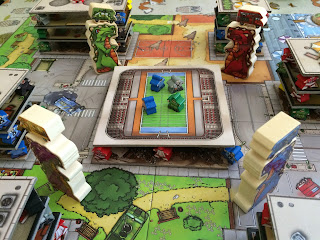 One thing about the components before we start. Our copy was missing a floor tile and apparently this was common in the early print runs (we have the Rampage named version). However I must praise Repos’ customer service here as 4 days after I emailed them I had a replacement part sent. I couldn’t ask for better so many thanks Repos.

Set up takes a bit of time but it’s going to be worth it. You will be constructing Meeple City with card tiles and meeples to support the floors. 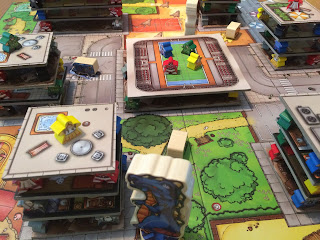 David: Yes it does take a while to set the game up so it’s not a game we can play if we don’t have a lot of time. I do like setting it up though and putting the bat symbol on top of one of the buildings.

Mike:  Oh yes the artwork on the board is vibrant and so detailed. It gives it a cartoony feel and has lots of little hidden Easter eggs to find.

Once the board is set up each player is given a monster screen to hide your eaten meeples behind, 4 teeth, a character card, a power card and a secret super power card.

The character card will give you a condition to meet to gain extra victory points at the end. This could be you will gain 10 victory points if you have eaten the most red meeples for example.

The power cards give you special abilities you can use in the game. 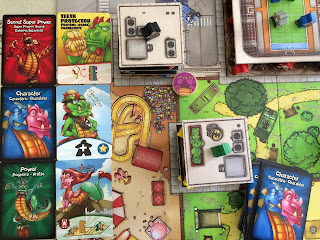 David: These cards add a bit of extra strategy to the game. It makes each game a bit different. Star dance power is my favourite as it lets you use 2 flicks rather than one on a move. This can be very useful getting close to the buildings to demolish.

Mike: I keep forgetting to use my powers I really must remember this next time. After your powers have been set it’s onto the game. Each turn you will be allowed to carry out 2 of 4 different actions and you can repeat the same action twice if you choose.

Your choices are move, demolish, toss a vehicle and breathe.

To move you flick the small monster disc and your monster moves to that new location. Be careful as if you flick it off the board you will lose a tooth.

Demolish will let you pick up your monster if it is touching the pavement of a building stack and drop it on the building stack. Any floors that are clear of meeples after you have done this can be placed behind your screen to score a victory point.

Toss a vehicle lets you pick up a wooden vehicle that is in your area and place it on top of your monsters head. You then flick it off and aim for a building or another monster. If at any time in the game you knock another monster over you take one of their teeth to score at the end of the game.

Breathe - this is the funniest one as you place your chin on top of your monster breathe in and blow. You can try to blow another monster over or topple some buildings. It’s a lot harder than it sounds.

David: I like to demolish as it is the most destructive. If you’re lucky you can demolish twice in a round and send meeples everywhere ready to eat. When you have finished your actions you can eat the meeples that are in your area. This is why it’s good not to lose teeth as you can eat as many meeples as you have teeth. In the last game I played I won by knocking over the other monsters and taking their teeth off them.

Mike: Demolish is fun but you have to do it with style. One thing we haven’t mentioned is runaway meeples. If a meeple leaves the board it is added to the runaway track. This is the penalty system in the game and can make demolishing near the edges risky business. If on your turn you cause a meeple to flee and it fills the track you will get a penalty. 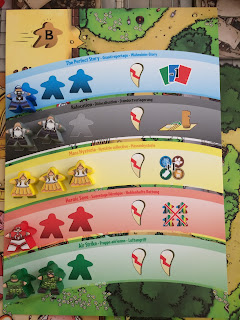 David: This is so frustrating it can really stop you when you think you are doing well but the punishments can sometimes help other players get back into the game.

Mike: The game continues until all the tower blocks are demolished. Then scoring is worked out. You will get 10 points for each complete set of meeples you have eaten. You need to be thinking about this when you play as you need one of each colour to score. 1 point is given for each floor and 2 points for each tooth taken from another monster. You then add any bonus victory points from your character card to determine the winner.

This game is light, simple and pure fun. As such it’s a great game for all generations. It requires very little strategy and is easy to teach. The power cards might be a bit complicated for younger players but this element could be easily left out of the game. Children will love it and I’m sure with relaxing the rules this could be played with younger children than the suggested 8+ as it’s all about smashing the buildings.

David: Yes and my baby sister has already chosen her favourite monster and is ready to go. 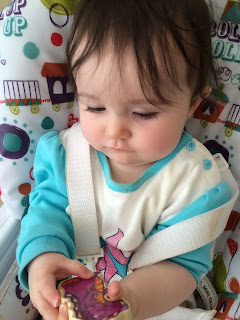