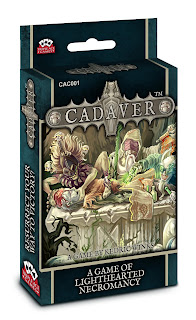 This is a review of a promotional copy kindly sent to us by Triple Ace Games.
Diolch yn fawr.

Mike: In Cadaver you are playing as a necromancer attempting to reanimate a series of cadavers. You do this by using arcane resources with the help of the diabolical accomplices.

The game supports 2-3 players but this can be increased to 6 with an additional deck.

At the start of the game you will remove 2 of each resource card from the deck and place them in the centre of the table. The deck is then shuffled and each player is given 5 cards.

The player who is closest to death starts first. That has to be one of the darker ways to decide first player I have seen. I do love these creative ways on deciding a first player.

On your turn you have three phases laying, drawing and trading. You can lay up to two cards from your hand or discard. The cards you can lay are Corpses, resources, accomplices, ghouls, coffin lids and coffin keys.

Corpses are what you need to win and how you score points. When you lay a corpse on the table it will have three resource symbols on it. You need to also lay resources on the corpse to score it. So it is impossible to play and score a corpse on the same turn.

Resources – there are brains, potions and scrolls. These resources are needed to raise the corpses.

Ghouls are nasty. When you lay a Ghoul you can take an accomplice or a corpse from your opponent and place it in front of you. These cards can quickly change the direction of a game and really spice things up.

Coffin lids are used to block opponents. For example you can see your opponent needing potions to score his corpse. You can block it by placing a coffin lid on the potion resource pile. The only way this can now be used is if it is unlocked by using a coffin key.

David: Also there is only two of each accomplice so this means in a three player game you might not be able to get the accomplice you need. The coffin lids can also be nasty as you can really cause some problems. Sometimes you lock a resource and then need it yourself a bit later on.

The Ghoul cards are great to play if your opponent has 2 resources on a corpse. You can steal it and score it in one turn if you have the last resource required. This can be a great way of getting a few sneaky points.

Mike: It’s so frustrating when that happens. Good point about the accomplices. We noticed there were only 2 accomplices when we played a 3 player game. We decided to make the same rule in a 2 player game and removed 1 of each of the accomplices to make it a bit harder. This increased the difficulty and made you think about how you use the Ghoul cards.


So back to the turn phases. Once you have finished laying cards you draw back up to five cards from the deck or resource pile if you have the right accomplice.

At the end of the drawing phase is the trading phase. You can trade with another player as long as they agree. This doesn’t happen much if at all in 2 player games but can be crucial phase of the game with more players where resources may be a bit scarcer.

Play continues with each player taking a turn until the final card is drawn from the deck. Players then have one turn each remaining. After this players organise there corpses into sets for scoring.

It is very simple to score and makes it easier to teach others how to play. I would feel comfortable teaching my friends this in school.

Mike: Another great little filler game from Triple Ace Games. Their games are light and as David has already mentioned easy to teach. They have quickly become our go to games to take out and about.
It easy to see why. Cadaver is simply a pack of cards, no counters or board. This makes it a great choice to take out for example to play whilst waiting at a restaurant.

I mentioned the same with Halfling feast but I believe the suggested age higher than what I would suggest. I know there is a theme of necromancy and corpses here but if your child is into books and films like Harry Potter they will love this. I would suggest 8/9+.

Mike: We had great fun playing this its another hit in our house. We wish Triple Ace Games all the best on their Kickstarter campaign with another great family game.

You can back it from 23rd November. 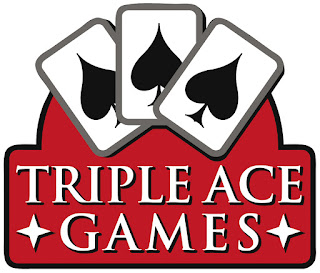