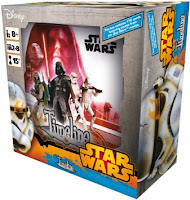 Mike: So after watching The Force Awakens we got home and a copy of Star Wars Timeline was waiting for us. Kindly sent to us from Esdevium Games. What a great way to end the day.

The timing was perfect we were in the Star Wars zone and played this all evening.

Before we start the review you need to bear in mind this is a game for Star Wars fans. If you haven’t watched episode 4, 5 or 6 then this game isn’t for you.

David: In Star Wars Timeline you and the other players are trying to recreate the timeline of the Star Wars original trilogy.
Set up of the game is easy. Shuffle all of the cards in the game and deal the top card from the deck into the middle of the play area.
This is the starting point. In the picture below you can see it is from episode 5 and is numbered 648. 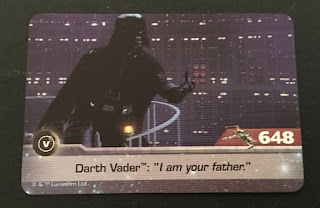 Each player gets 4 cards that are face down with just the scene description.
So the youngest player will start first. Which is always me :-) .
On my turn I look at the cards in front of me and choose to play one. When I do this I decide if it is before or after the event in the middle of the table.
If I pick this one for example. 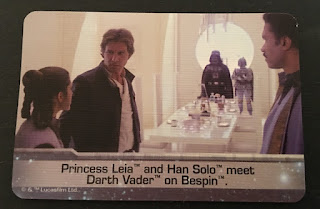 I think this happened before Darth Vader says “I am your father”
So I place it to the left and turn it over.

Success.
Mike: Then it’s my turn.
On my turn I believe this happened after Darth Vader says “I am your father”. 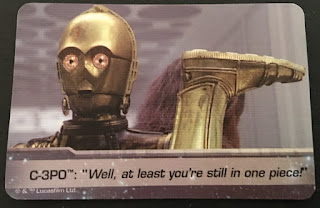 I place it to the right turn it over

and ouch I’m wrong. The scene happened just before. As you can see in the photo it should have happened in between the 2 cards already on the table. The card I tried to play is returned to the box, I take another card from the draw pile and its David’s turn.

David: So we continue back and forth until a player has got rid of all their cards to win.

Mike: It is as simple as that. However as I mentioned earlier there is no game here for a non Star Wars fan. They would find it very frustrating trying to make sense of where cards should be played.
The game is extremely simple and great for kids to play.

Unlike the other Timeline games it cannot be mixed with the other games. Which again limits its audience but it is a nice way to fill a gap between Star Wars movies.

We made the game a little bit longer and started with a bigger hand to increase the difficulty if you are finding games are over quickly.


David: I recommend this and had great fun playing it as I can beat my Dad as he sometimes forgets
the order of the scenes. Pick this up if you have a Star Wars Mad Family. I hope they release a set for episodes 1-3.
Posted by Unknown at 20:33