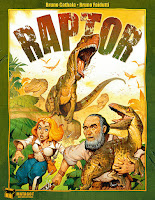 Mike: A big thank you to Esdevium Games for our review copy. You can find your nearest game store using their handy store locator.

Raptor is a 2 player asymmetrical game where one player is a team of scientists the other a mother raptor and her babies.

At the start of the game, the modular board is set up with 6 double sided tiles (either jungle or savannah). At the end of either side, there are 2 L-shaped tiles. These are the starting points for the scientists and where the baby raptors will try to escape.

Each player takes a deck of 9 action cards, a player aid and their playing pieces.

David: The miniatures are a really good each of the 10 scientists is different and the raptor looks awesome in its striking pose. 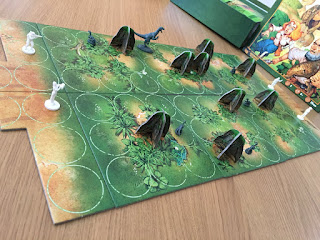 Each player when shuffles their action cards and draws 3. Then we are ready to play.

Mike:  Each player chooses one of the three cards they have in their hand and places it face down. Both cards are revealed simultaneously.

The player that played the lower value goes first and plays the action on the played card. Then the other player will spend action points equal to the difference between the values on the two cards.

This is a simple yet very clever mechanic and requires you to think about your options each turn. Do you try and play a low card to get the action you want but risk giving a lot of action points to the other player? There is a lot of strategies here and it gives to some exciting turns where you try and predict what the other player will do.

The card actions can be quite powerful. For example, the scientist can light fires that block the raptor and its babies from moving use correctly this can really help you out. The raptor has a card ability that allows it to remove the mother from the board then after the scientist has used up their actions points place her back anywhere on a free space. This same card also lets the raptor player see what the scientist will play next. This is a very powerful card for the raptor to use.

Mike: I agree, it is in the raptors best interest to get out and attack early on and try and make a dent in the scientists progress.

The scientist has some options with their action points. They can move, shoot the mother, put a baby raptor to sleep or capture a sleeping baby raptor.

Each turn the raptor can move, attack a scientist, put out fires with her tail, wake up sleeping babies or use action points to move babies towards the exit.

David: It’s a lot trickier than it looks to shoot that mother raptor and you need to be sure you want to as next turn she could charge at you and eat you. The game is a lot of fun and doesn’t take long to learn.

Mike: The games we played were around 15 to 30 minutes and requires very little time to reset after a play. This is great as it allowed us to get a few games back to back, switch sides and try out different board layouts.

It is a bit more of a challenge playing as the raptors as you do have to give some careful consideration to the cards you play and your moves. It can be a bit more forgiving for the scientist player as you have a few more resources to work with. I think this is something to keep in mind when playing with younger players. They may want to play with the cool dinosaurs and who wouldn’t but it can be a bit harder to master.

There is something that entices me about 2 player only games. There are some great ones out there at the moment and for me, this is up there as one of my favourites. It is fun, challenging and has just the right amount of luck with card draw against strategic thinking. 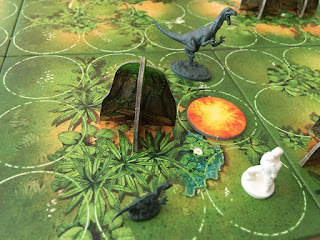 David: If you like chess style games I think you will like this. You have to plan your moves ahead and think about each turn and the next. Especially if you are the raptor. I like that the tiles are double sided as well so there is a lot of different ways you can set up the board.

I agree this is one of the best 2 player games we own. It is very easy to set up and play and with the quick time for a game, it’s a great filler to play before we play a bigger game.

Mike: Do we recommend it?

Sure this is a very well thought out strategic game that kept us coming back for more. The theme is excellent and it’s presented very well. The imbalance between the 2 sides may put some players off but I think it adds to its charm.

So two big raptor claws up from us at Board Know More.