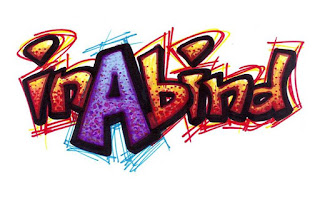 Mike: Firstly can I say big thanks to Bez @stuffbybez for a review copy of his game In A Bind and the expansion pack.

So what is In a Bind? The rules are simple you draw a card, read it aloud and obey the instruction.

These instructions stack over the game and you must obey them all or you are out. That basically is the game. It’s been a while since I have played a game so simple to explain and get going in minutes.

David: Yes, I have played this with my family and friends and it is very easy to teach. Some cards are harder than others and might be too difficult for younger players. You can easily take these out though and customise the deck.

You can also play this easily with 2 players or even on your own as a challenge to how many cards you can complete without failing.

Mike: It is easy to customise the rules and the game to fit your group. As I mentioned earlier it is designed as a knockout game.
Every turn you will take a card and if at any point you fail to adhere to all the commands on your cards you are out. 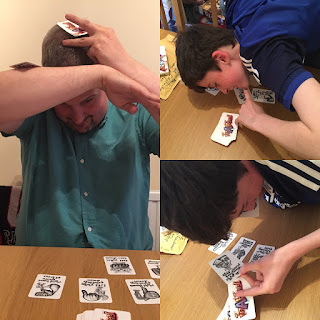 Get your camera at the ready when playing this game it often results in some odd yet comedic poses. 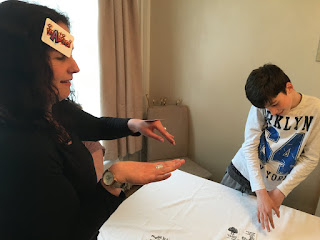 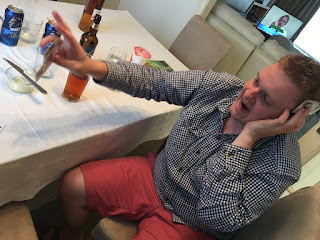 Let's get David to give us an example.

Mike: Because you’re younger and better at this game than me.

So on his first turn, David draws left palm face down. 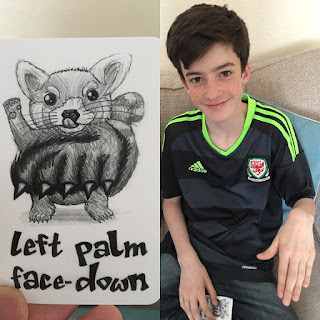 Then on his next turn, he draws left wrist bent making sure he obeys left palm face down. 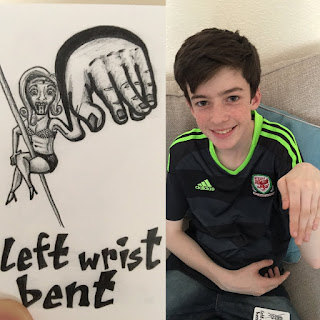 On the 3rd card, he has this card touching pinky. 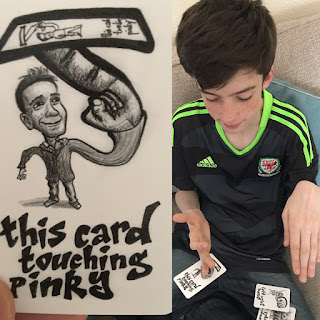 On his 4th turn, he has right pinky touching nothing. 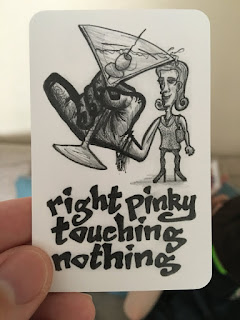 As he has placed the last card touching his right pinky he must switch it to the other hand has he did this he dropped the card and was out.
David: I can’t believe I did that. I have had better runs than that, my personal best is 8 cards.

Mike: I don’t think I have ever got past 6 without struggling. (Hint some of the cards are a bit easier if you wear glasses).
You may have remembered we mentioned we had the expansion as well. This makes the game a lot harder but equally as fun. 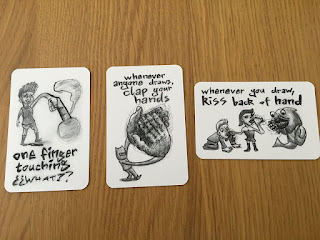 Wildcards have a word omitted like “One Finger Touching What?” The player to the right of the player who picks up the card fills in the blank. So it could be touching your nose, your left knee or something else (keep it clean hehe)

Triggered Binds require the player to do something whenever anyone draws a card and Communal binds effect everyone playing and are left face up in the centre of the table.

David: Some of these cards are so difficult. Trying to kiss the back of your hand whilst balancing cards on your elbow for example.

Mike: But so funny to watch! So as you can probably guess we have had great fun with In a Bind. 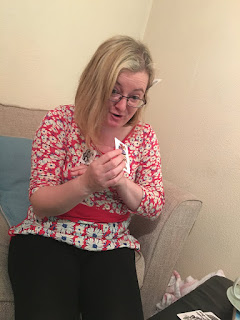 When people wonder why football is so popular it’s not hard to see why. Place a ball in a group of kids and adults and within seconds a game is going. In A Bind falls into this category for me. I have played it with a few groups and as soon as one game ends we are setting up another.

Do we recommend it? Yes but there are some exceptions. The game does involve a bit of bending, twisting and stretching so requires a bit of physical dexterity. This can also be played with younger children 5+ but you will need to remove some of the more challenging cards from the deck as it will be very frustrating for them.

It’s a great game for work and team events as it has a twister like feel but without the invasion of others personal space. There are also some variants in the rules that allow for team play.

David: I’m a big fan of dexterity based games. I love how quick they play and everyone can have a go. This one is fantastic as you don’t need a board or a table for setup so you can play it anywhere.

Also, Dad likes it and he isn’t a big a fan of dexterity games as I am (as I normally beat him). So I agree and will recommend this to my friends in school as well. It’s sitting on the top of the list for our favourite filler games and getting a lot of plays. We look forward to seeing more of Bez's games in the future.