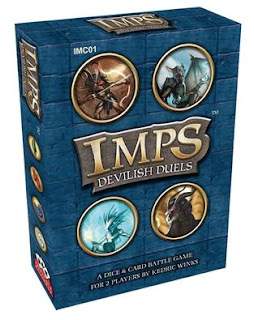 Time to play: 20 minutes.
Players: 2 players
Suggested age: 14+
Price: £15 (On Kickstarter)
This is a review of a promotional copy kindly sent to us by Triple Ace Games.
Diolch yn fawr.

Mike: It’s so nice to see another game land on our doorstep from Triple Ace Games. If you have read our previous reviews you will see we have a fond love for their games. (Halfling Feast & Cadaver)
Like their other releases Imps is quick to set up and play typically takes around 20 minutes for a full game.

Imps is a Dice and card battle game with each player controlling four imps each. Each imp is aligned with and element and has a mischief effect and you can choose any combination of imps to battle your opponent.

At the start of the game in addition to the four imps players also take 2 of each colour dice which represents Earth, Fire, Water and Air. These 8 dice and 4 imps form your pool. When you roll the dice and play imps these are in play. Any time an Imp or dice is banished these are put to the side and out of the game. 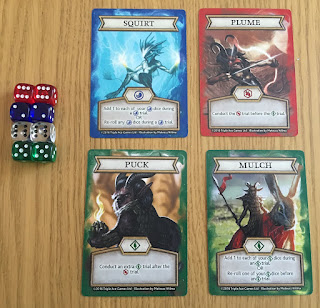 David: In Imps the goal of the game is to banish all of your opponent’s imps by winning elemental trials.

For our first few games, we randomly drew one imp of each element as we didn’t know what would work best. After a few plays, we then picked imps based on how we like to play.

Mike: That’s a good point David as its key to winning. Some Imps work well together and there are some strong combinations. Part of the fun of the game is exploring the different combinations and finding one that works for you. One thing the rules doesn’t cover is how to draft these Imps at the start of the game. Both players may both want the same imp. You could alternate or make up a draft rule for this.

David: The imp’s mischief powers are very important they let you change the game. For example, they will let you re-roll dice, add points to the dice, reorder trials and steal opponents dice.

Once you have chosen your imps you can start. Players chose to roll 4 dice from their pool. You then choose 1 or 2 imps to play and can re-roll up to 2 of your 4 dice. Once this is done players place their dice in play and take part in the elemental trials. 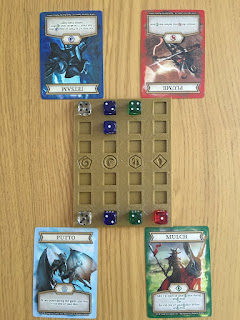 Mike: The trials play in order (Earth, Fire, Water and Air) unless an imp’s mischief changes this. Winners are determined by comparing dice scores if there is a draw nothing happens if one player is higher they win. If you win by double or greater than your opponent’s score you will double win and gain a greater benefit. 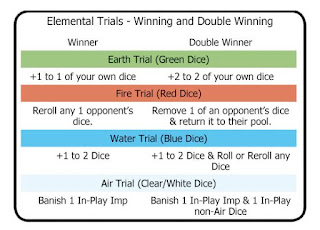 David: My favourite imp is Spark as she lets me move a red dice in play to another trial. By doing this I can double win on fire and remove opponents in play dice and return it to their pool. This can help you win an air trial and banish an imp. 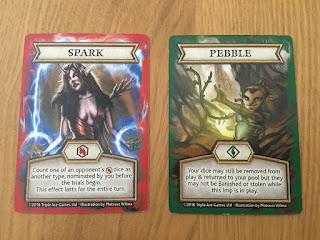 Mike: I like Pebble she stops you losing your dice this can be very useful.
It’s those little combos with the imps that you have to look for and work to your advantage. This is what I have come to love most about the games Triple Ace Games make.

I love head to head 2 player games especially when you can adapt the game to your own style. David and I have really enjoyed this and as always it was a pleasure to play.

Check it out and if you decide to back take a look at adding Rocket Race to your pledge it’s our favourite of the Triple Ace Games collection.

We wish Triple Ace Games all the best with the campaign and I’m sure they will fund with another quality game.